In the spring 2020 semester, undergraduates enrolled in Professor Vinson’s Visual Rhetoric course maintained a blog all semester devoted to discussing theories of how visuals work as means of communication. We had lively and engaging conversations in the comment thread, ranging from debates over copyright infringement and representations of women to passionate reflections on the ethics of quantitative claims and racialized binaries reproduced in everyday media.

In this concluding blog post, we are showcasing our final projects of the course. In response to the COVID-19 pandemic, and the series of closures and other physical distancing measures that developed to combat it, Professor Vinson asked students to use a platform called Adobe Spark to create multimodal Web pages that document and communicate something about the college student experience in this uncertain time.

Students were challenged to use everything they learned this semester—about color, typography, photo composition, photo editing, copyright, captions, connotative meanings, and the varied relationships between words and images—to create a coherent and engaging message.

I encourage you, dear reader, to take the time to review these pages and glean what you can from the smart, creative, and deeply critical thinkers that are the students of UMass Lowell’s Visual Rhetoric course:


Posted by Deanna Darah at 3:30 PM No comments:

This week’s reading focuses on Essay 2 and the two student examples given to us on Blackboard. Essay 2 asks us to write a visual cultural critique and thus can be about subjects like class, gender, race, age, etc. and can offer important lessons about all of them.

We ask you to read the two Essay 2 examples provided on Blackboard then answer the following questions:


As a reminder, here are the theories that we are using in Essay 2:


We also invite you to share the challenges you’re having in writing this paper. It might lead to new ideas/perspectives about your subject that you could then incorporate in your paper, and we’re all for creating stronger papers.

With that, we hope you all stay safe and have an easy time navigating the rest of the semester!
Posted by Michael Parke at 11:26 PM No comments:

Watching in the Dark: The Male Gaze in Cinema

Hope you’re all staying healthy while trying to make the best of the situation that we’re in.
We know this transition is difficult, so our prompt will give you a chance to sit back and
watch some movie clips and apply them to this week’s reading.

Mulvey's "Viewing Pleasure and Narrative Cinema" and The Practices of Looking (pp.
120-129) focus on the male gaze present in visual representations of women, specifically in film.
According to Mulvey, there has been "a split between active/male and passive/female...In their
traditional exhibitionist role women are simultaneously looked at and displayed, with their
appearance coded for strong visual and erotic impact so that they can be said to connote to be
looked-at-ness" (837). Mulvey emphasizes that women do not move the plot forward in narrative
films, but they are simply there to be viewed by the male characters and audience members.
Although Mulvey was writing in the 1970s, these ideas still hold true today in modern films.

This week, we are asking you to complete the following prompt.


2. Choose one to write about. If several other students have chosen the same clip, please
consider responding to their post with your own ideas that add to the larger conversation.

3. Argue whether or not this clip demonstrates the male gaze as outlined in Mulvey’s essay.
How do you think Mulvey may respond to this clip?

To help you with your post, here are some of the key vocabulary words from the readings.

It is not necessary to use these in your post, but just keep them in mind when thinking and writing
about the male gaze.

Voyeurism - Pleasure is derived from looking without being seen.

Phallocentrism - The phallus, a symbol of men’s power, is the main element in the organization
of the world.


Scopophilia - The sexual pleasure that a person derives from looking at prurient objects of eroticism,
such as pornography, the nude body, and fetishes, etc., as a substitute for actual participation in a
sexual relationship.
Posted by Kacey Corbett at 7:33 PM No comments:

The Gaze and the Other: The Effects of Binary Opposition and Relationships of Power in an Increasingly Visual Culture

This week’s reading was on the representation of “other” groups in visual culture, or minority groups that are perceived to be different from an ethnocentric, patriarchal perspective. This chapter focuses closely on the idea of “the gaze”, which is the way that the audience of a visual is intended to perceive the subject of the visual. While this theory can be applied to any person portrayed in any image, it is most frequently perceived as the lens that a group holding some form of power (whether it be racialized, gendered, sexualized, economic, or social status) views the “lower” group through, and the ways that the visual is constructed to influence this.

Another way of analyzing “the gaze” is through the concept of binary opposition. Binary opposition is a pair of two things that are perceived to be polar opposites. In practice, this can refer to almost any opposite concept, however, for the purposes of this week’s blog, we are focusing specifically on diametrically opposing social groups where one has historically wielded social power over the other, such as male/female, white/non-white, cis-gendered/transgendered, straight/LGBTQ+, rich/poor, and so forth.

For this week’s blog, we want the class to:

While finding images and examples of binary oppositions within visual culture, reflect on these terms from this week’s reading:

The Gaze: helps to “establish relationships of power, which typically function to represent codes of dominance and subjugation, difference and otherness... In systems of representation, meaning is established through difference” (Sturken & Cartwright 111).

Unmarked: The first category designated by binary oppositions is the unmarked or the “norm”. For example, Sturken and Cartwright state that “the category of white is understood in European American contexts to be the primary category or the ‘norm’” (Sturken & Cartwright 111). The unmarked demographics are perceived as dominant.

Marked: The second category is the “marked,” or what the authors define as other. Whereas white is understood to be the “norm” in the example above, black (or brown, etc.) is understood as other to that category - what is not white (Sturken & Cartwright 111). The marked demographics are subverted or subjugated by the unmarked.

Interpellated: The authors define interpellation as “A process of interruption through which an individual viewer comes to recognize himself or herself as among the class or group of subjects for whom the message seems to be intended” (Sturken & Cartwright 103). 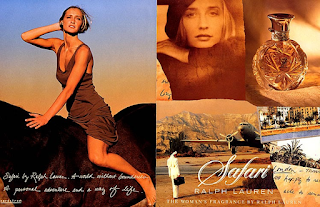 Above is a Ralph Lauren Safari Ad from the 1990s, which was featured on page 113 of our reading for this week. It is an example of binary opposition, as it demonstrates Western v. Eastern cultures and Occidental v. Oriental ideals. The "unmarked" would be Western, while the "marked" is Eastern.
Posted by Tyler White at 12:18 AM No comments:

Who is She, Do You Know Her?: Representations of Women in the Media

For this week’s assigned material students were asked to watch the film Miss Representation. The film is a cultural critique that exposes how the media functions as a patriarchal construct to influence and control women. Through instigating self objectification by women, the media is able to utilize the rhetoric of empowerment (through physical beautification) to completely distract and disempower women resulting in lower political efficacy and oppression. For this prompt we ask that you consider your thoughts and reactions to Miss Representation while making connections between the film itself and the roles that you’ve witnessed the media play in the representation of women. 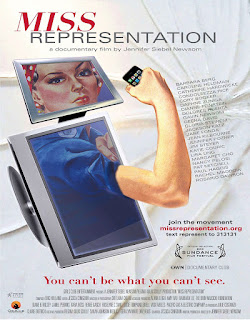 While writing your responses, keep in mind some of the following terms used in the documentary:
Self-Objectification: when girls/women internalize an observer’s perspective on their physical selves and learn to treat themselves as objects to be looked at and evaluated for their appearance; studies have shown that self-objectification is much more prevalent in girls/women than boys/men
Symbolic Annihilation: the way cultural production and media representations ignore, exclude, marginalize, or trivialize a particular group
“Fighting Fuck Toy:” Caroline Heldman’s term for the manner in which female superheroes are depicted in the media, which she defines as follows:
“hyper-sexualized female protagonists who are able to “kick ass” (and kill) with the best of them. The FFT appears empowered, but her very existence serves the pleasure of the heterosexual male viewer. In short, the FFT takes female agency, weds it to normalized male violence, and appropriates it for the male gaze.”
Source: https://drcarolineheldman.com/2012/04/05/the-hunger-games-hollywood-and-fighting-fuck-toys/

Posted by Rebecca Primak at 10:42 AM No comments: